“From whence shall we expect the approach of danger? Shall some trans-Atlantic military giant step the earth and crush us at a blow? Never. All the armies of Europe and Asia...could not by force take a drink from the Ohio River or make a track on the Blue Ridge in the trial of a thousand years. No, if destruction be our lot we must ourselves be its author and finisher. As a nation of free men we will live forever or die by suicide.”

"...we will live forever or die by suicide."

A community of dedicated Americans from all races, creeds, and backgrounds, united in our desire to restore unity, fraternity, solidarity, and sanity to the current  social climate of toxicity.

Through our shared experiences on the front lines of business, law enforcement, family life, military, medicine, and education, we are now leveraging that practical knowledge in the pursuit of unity.

To peaceably strive to craft the more perfect union promised in the US Constitution, eschewing violence of any kind, except when absolutely necessary to protect the sanctity of all lives or to preserve livelihoods.

know history... or repeat it:

Abraham Lincoln understood that the most grave threat to the United States would come from within our own borders, not from outside her shores.

We are apolitical. We do not endorse or support any politician or political party. This is not about Democrats or Republicans, nor does it concern conservative or liberal philosophies. It is not about race, or gender, or religious affiliation. This is about preserving our society, by preserving debate - including one's right to protest that which one supports or opposes, openly, freely, and enthusiastically, but not violently.

It is a deplorable reality that at our founding some members of the human race were treated as far less than equal, but that reprehensible situation preceded the existence of the United States' great experiment in civilization. Though it took too many years, this great injustice was subsequently rejected by Abe Lincoln, the first American president to openly defy the institution of slavery, who risked everything to correct the wrong, and amend society for the better.

Lincoln sought to restore unity, fraternity, solidarity, and sanity to the then fractured United States. We seek to do the same today.

We are all, every one of us, flawed human beings. Whether one attributes that imperfection to the religious principle of sin, or the humanistic concept of nature or genetics, the reality is the same: no one is perfect - all fall short of the ideal.

The current, possibly well-intentioned trend to erase all negative aspects of our nation's history, in order to atone for past mistakes and transgressions is clearly misguided and ill-informed. This effort has evolved from academic exercises to outright and wonton violence and destruction against people, art, icons, and institutions around the country.

This belligerent and violent behavior cannot continue to be tolerated, nor will it be. If our political leaders lack the will to stand up for those that are victimized, others must.

No society can withstand an onslaught of self-abusive aggression, aimed at destroying the very fabric that unifies its people.

While the United States is far from perfect, it is the most perfect form of government ever attempted. The liberties our citizens enjoy are endangered by nihilistic threats and encroachment of adversarial political systems, which are completely at odds with the US Constitution, and the will of the American people.

The Sons of Abe stand ready to support and defend this country, its states, counties, municipalities, cities, towns, neighborhoods, homes, and businesses from the onslaught of anarchistic, Marxist, and other influences being brought to bear against our way of life.

While we abhor violence and aggression, and will go to tremendous lengths to prevent and avoid same, we are well prepared and trained to meet unsolicited and misguided antagonism with utmost fervor and complete resolve.

Retired Captain David Dorn voluntarily left the comfort and safety of his home in the wee hours of June 2, 2020 to try to prevent looters from destroying his good friend's pawn shop. Captain Dorn had spent an illustrious 38-year career rising through the ranks of the St Louis Metropolitan Police Department, before retiring and becoming chief of a small, neighboring community's police force.

Captain Dorn was a role model throughout his life. He was a model citizen. He should have been respected and lionized by all, but instead, he was shot dead by a lawless mob of looters, arsonists, assaulters, and murderers. These were not protestors voicing legitimate grievances. There were countless lawful, honorable, and angry people protesting and marching at that time, but they were not alone. They were accompanied by a parasitic, lawless, violent cabal out to exact revenge for perceived wrongs, against anyone and anything in their path.

Why would Captain David Dorn, a man who had retired and left behind his life of police service to enjoy retirement with his family, go out alone at 2:00 AM to protect a store from looters? Because he cared more about the welfare of his community, than he did his own comfort and safety. He cared, and he acted. Unfortunately, he had no support, and no back-up. He acted alone, because he was not willing to remain a spectator to a wave of injustice and crime sweeping his community.

Some of the most vocal fanatics in our day fashion themselves as valiant purists opposing the most vile forms of racism and fascism, when in reality they themselves engage in violent, fascistic behavior against anyone who would dare counter or defy their ludicrous demands.

At some point historians and social scientists will reflect upon, analyze, and debate how we got here, but at this moment, the pertinent question is, what happens now?  Unlike many of our political "leaders" we will not cower. We will not fear. We will not be silent. We will not continue to watch while fanatical mobs destroy lives and erase livelihoods.

We, like Captain David Dorn, will not sit idly by. 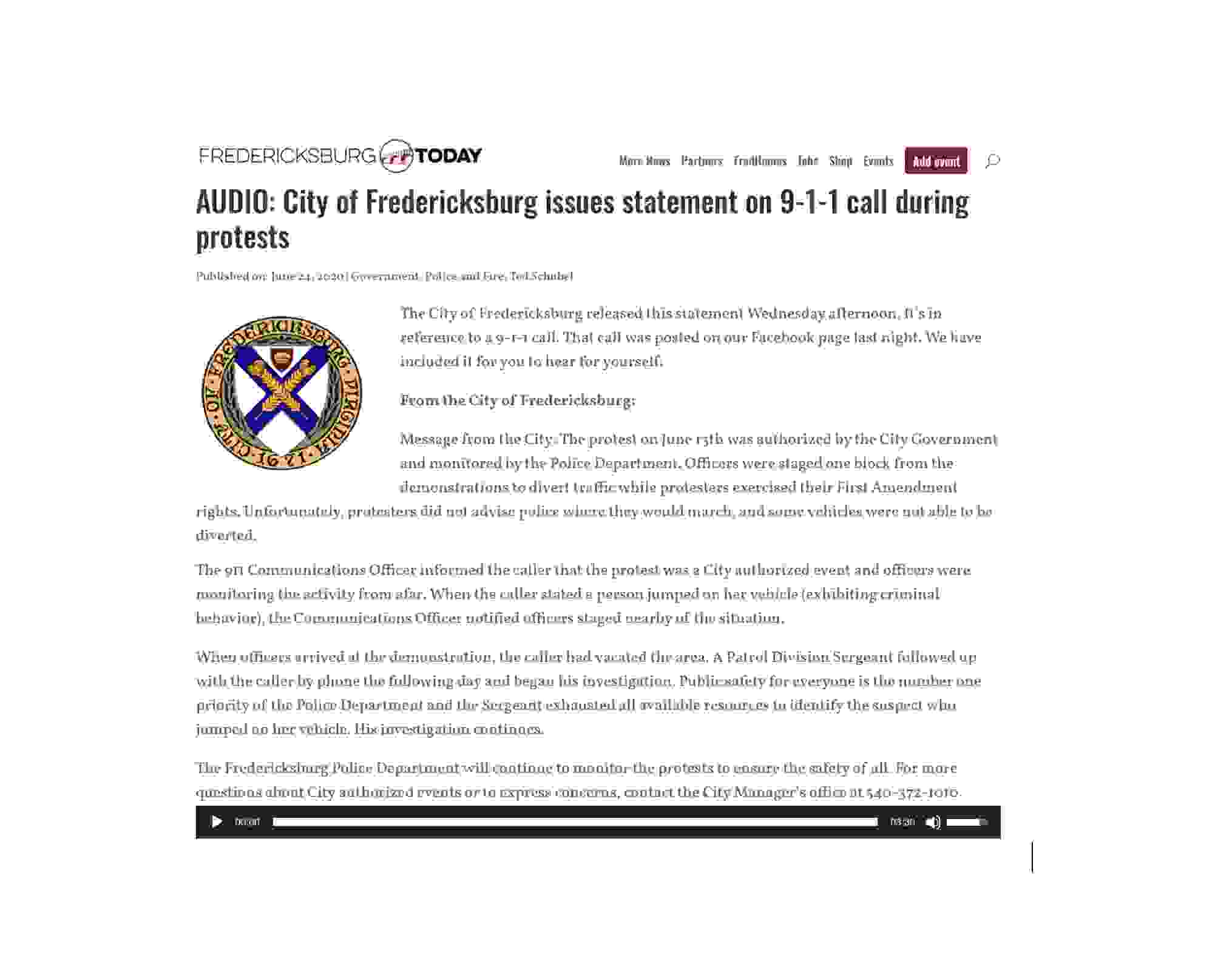 This is anarchy unabated. A woman and child, terrified to the point of tears, trapped between a belligerent protest and an enfeebled political class so paralyzed by fear that they hide their faces, drop to their knees, and plead for mercy from the oppressors of the people they were sworn to serve and protect.

"Whenever the vicious portion of [our] population shall be permitted to gather in bands of hundreds and thousands, and burn churches, ravage and rob provision stores, throw printing-presses into rivers, shoot editors, and hang and burn obnoxious persons at pleasure and with impunity, depend upon it, this government cannot last. By such things the feelings of the best citizens will become more or less alienated from it, and thus it will be left without friends, or with too few, and those few too weak to make their friendship effectual."

Consider the fact that Lincoln's words above were spoken nearly two-hundred years ago, at a time when this nation was on the verge of self-destruction, and compare what he described at that time, to today's looting, burning, tearing down of statues, and cancelling of people and careers. Abe Lincoln knew those things could not continue with impunity then, nor can they now.

"There are two ways of exerting one's strength: one is pushing down, the other is pulling up."

“We all should rise, above the clouds of ignorance, narrowness, and selfishness.”

“Egotism is the anesthetic that dulls the pain of stupidity”

“I early learned that it is a hard matter to convert an individual by abusing him, and that this is more often accomplished by giving credit for all the praiseworthy actions performed than by calling attention alone to all the evil done.”

"The limits of tyrants are prescribed by the endurance of those whom they oppress.
Man’s greatness consists in his ability to do and the proper application of his powers to things needed to be done."

"Find out just what any people will quietly submit to and you have the exact measure of the injustice and wrong which will be imposed on them."

"A smile or a tear has no nationality; joy and sorrow speak alike to all nations, and they, above all the confusion of tongues, proclaim the brotherhood of man."

"The life of a nation is secure only while the nation is honest, truthful, and virtuous."

"It is easier to build strong children than to repair broken men."

Better yet, Join us!

This is a nationwide endeavor. We can't do it alone.